A new look in church vestments.

Elsewhere, some black churches are opening their hearts and doors to all. 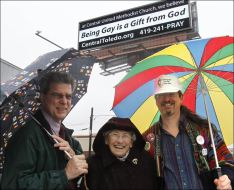 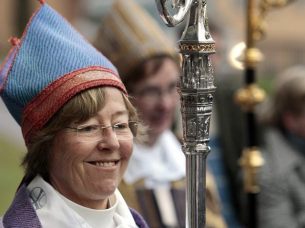 Eva Brunne, who was made the world’s first openly lesbian bishop by the church of Sweden in 2009, and has a young son with her wife and fellow lesbian priest Gunilla Linden.

Is it too late to reconcile our differences?

After decades of fire and brimstone being hurled from the pulpits of the world over the “abomination” of homosexuality, the tide is turning. The LGBT welcoming revival within Christian churches is expanding at a rapid rate. We have seen this growth reflected in our own efforts: there is a lot of  heavy lifting required to open hearts, minds and eventually – church doors.

There is a huge range of opinion in the LGBTQ community as to whether the Christian churches can ever redeem themselves for their decades long demonization of our very existence. It is helpful to remember that Christianity is anchored by the concept of forgiveness. Other religions are less inclined to change, and the approbation and punishments doled out by Muslims and Hindus to gays and women in general are as harsh as they are unforgivable. While a few extreme Christians suggest harsh punishment to gays, it is in the Middle East that gays are thrown from the top of buildings, stoned to death or beheaded. In India is is still difficult for a Hindu woman, much less a lesbian, to find work or living accommodations separate from their families.

What brings all this to the fore is the growing popularity of the website GayChurch.org  that helps exiled LGBTQ Christians to find churches that welcome them back, and to connect with resources that confront the eight “clobber” passages of the Bible that some use to condemn homosexuality.  A link to helpful books by authors such as Mel White, Matthew Vines and Candace Chellew-Hodge.  They have a page to help find LGBTQ affirming churches. Here in the Berkshires the numbers are growing rapidly. When I wrote about this in a blog half a dozen years ago there were only two.  The First Congregational Church in Williamstown where we meet monthly was the first. Today there are ten.

You can also find information about denominations and congregations that affirm marriage equality by performing same-sex weddings. This is not very much of a stretch for Rainbow Seniors since the legal implications of a marriage can confer both legal benefits while you are alive, and secure the disposition of your worldly belongings after you are gone. And it is a lot cheaper than paying a lawyer to create trusts, power of attorney and the like.

WHAT DO THEY MEAN BY “AFFIRMING?”

The Gay Church website defines the word “affirming” as meaning the church does not view homosexuality in and of itself as a sin, and therefore they would welcome and treat a homosexual person no differently than any other person who walked through their church doors seeking Christ. We also believe that a fully affirming congregation allows ALL people the ability (as much as denominational polity allows) to be involved in all aspects of the life of the community.

Sometimes “affirming” churches are also known as “gay friendly” or “welcoming” churches. Although these terms have often been used interchangeably, some congregations differentiate between the words. For example, a church may “welcome” ALL people but may NOT “affirm” all lifestyles and therefore LGBTQI folks may not be allowed in leadership positions within the church. In the same vein, some denominations may forbid same-gender marriage or ordination of lesbian, gay or transgender people, yet a local congregation will fully embrace and affirm everyone in leadership positions within the local church.

Here’s a quick overview from the LGBT perspective by Arielle Scarcella and Matthew Vines.

And then there’s David and Jonathan whom “David loved more than women… and loved him as himself”. 1 Samuel 18-19

No wonder there are 75 religious denominations in the United States with more than 60,000 adherents. If you look hard enough, you might find one that is a perfect fit.

As we grow older, there is often a desire to come to terms with lingering resentments and the feeling of rejection that many of us carry from a youth and working life that was lived in or near the closet. Reconciliation with parents and siblings may no longer be possible for many of us, but to reclaim the spiritual and metaphorical life offered by a gay affirming church can be uplifting as we practice a little forgiveness ourselves, and reclaim our place in  the larger community.

Your comments are welcome, as are any updates on synagogues, temples and mosques that are LGBT affirming. And just for those who are still stuck in the Sunday School nonsense about traditional marriage, well, here is what the Bible actually defines as “marriage”.